It’s been a treat to be at this conference here in Chicago, having the honor to be present at all of the other Web–Wise conferences [1]. I’ve taken a personal approach to this conference since it has been held in Chicago and I am a native Chicagoan.

I remember on Wednesday night that John McCarter at The Field Museum talked about some of the problems that we’ve had in reaching some of our audiences. He admitted that we haven’t been doing a good job of getting science to young people in the inner city. That comment has been sticking in mind for the past few days, and I’ve been mulling over how we can do a better job of reaching different audiences.

Is there a better way of getting information to bright young people in our cities? Joey Rodger yesterday at the Conference talked about learning being "illogical and nonlinear" and that’s a good way of describing some of the learning experiences of some young people. When David Liroff talked about a six year old’s interest in quantum physics and string theory, I didn’t see that as being really unusual. I think there are lots of young experts in string theory, invertebrate paleontology, Renaissance art, and other fields lurking in our cities. We just need to find a way of reaching them.

I take a very personal approach to these young experts because of my own experiences as a young person growing up in Chicago, bitten by the science bug and needing information to satisfy my own personal needs. I too pursued "illogical and irrational" ways of learning. When I was a youngster I would ride on my bicycle to outcrops of limestone on the south side of the city. I would collect fossils from exposed limestone from the Silurian period, some 430 million years old. These fossils were once living creatures in a coral reef, when this area was much more tropical, like the Great Barrier Reef in Australia.

I couldn’t understand why my fourth grade class in grammar school didn’t have a formal class in Silurian marine paleoecology. I couldn’t understand that. I talked to the good nuns at St. Mary’s and they told me regretfully that they just could not justify a class on Silurian marine paleobiology. So I had to pursue my interest in this topic — in an illogical and irrational way — by visiting to The Field Museum, by exploring a diorama that reconstructed life in the Silurian seas in Chicago.

Figure 1: A reconstruction of a Siurian reef in the Chicago area, diorama at The Field Museum. This image (Negative Number GEO80820) is reproduced with the kind permission of The Field Museum.

I fell in love with that diorama. When I was communing with it on the second floor of the Museum, I was swimming in those long-gone ancient Silurian seas. At that diorama, I was literally visiting my Silurian friends — trilobites, cephalopods, and crinoids.

In my own illogical way, I took advantage of resources at the Museum. I was a frequent visitor to the Library at the Museum to the extent of even cutting classes at school so I could read books and papers on Silurian reefs, memorizing pages of information. Many years later, I met the author of those papers. His name was Heinz Lowenstam and he had taught at the University of Chicago and at Cal Tech [2]. I met Heinz at a meeting on paleoclimatology as an undergraduate [3]. I was very excited to see my hero in person for the first time. I had one of Heinz’s papers with me and I asked Heinz to autograph it for me [4]. I explained how honored I was to meet him, how my brother, sister and I had studied his work, pouring over his papers. Dr. Lownestam looked at me very strangely and asked me, "Didn’t you ever read comic books?" 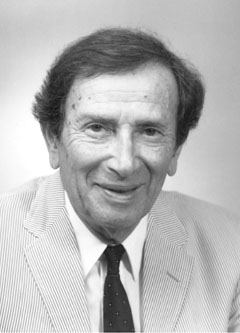 So I had very personal and irrational experiences with paleoecology at an early age and it inspired me into a career into the sciences and information and libraries.

We’ve talked a lot about technologies to make a Silurian reef alive again — whether it is on Ken Hamma’s hand–held device (GettyGuide) or Tom Defanti’s holodecks where I could be surrounded by the Silurian ocean and my friends [4]. I think these technologies are all fine and good and we should work to make them real and possible. However, what made my experience at the Field Museum worthwhile and deeply effective was not technology, not the experience of the diorama reconstructing the Silurian reef, but rather the human element at the Museum. The human element for me was the curator of invertebrate paleontology, Eugene Richardson. When I worked with Gene, all of this knowledge that I pulled from the literature, from the exhibits, all made sense.

Figure 3: Eugene Richardson, Curator of Paleontology at The Field Museum (left), and Tibor Perenyi, scientific illustrator at The Museum, creating a model of the Tully Monster, Tullimonstrum gregarium. Tullimonstrum is the state fossil of Illinois. This image (Negative Number GEO82825) is reproduced with the kind permission of The Field Museum.

I truly think that one of the key things that we have to remember in all of this work is the human element. We have to find a way to involve humans in all of this digital activity to make that real. There are plenty of examples of the need for this human engagement in technology, such as Bonnie Nardi and Vicki O’Day’s book Information Ecologies [5]. Nardi and O’Day, as anthropologists, analyzed how individuals used technologies; they found that technology is most effective when humans help each other, that is when technologies are truly engaged by a human element. So we have to find ways to make our new technologies engage humans in new and innovative ways.

At the Chicago Botanic Garden, we have a program that brings inner city young people to experience the Garden as part of the staff [6]. These are bright students but they are at a point in their academic careers where they are not quite sure about attending a college or university. These students work with curators and managers in a variety of experiences, learning science and other skills. I worked with one of these students, and it was as thrilling for me to watch as it was for her to experience holding a book published in 1483. How many students have the experience of working with incunabula? We have to find new ways of bringing these sorts of human experiences together with digital experiences, because in that way we truly will make lasting impressions on future generations.

Edward J. Valauskas is manager of the Library at the Chicago Botanic Garden. He is also Senior Fellow at the Graduate School of Library and Information Science at Dominican University in River Forest, Ill. Edward is Chief Editor of First Monday.
E–mail: ejv@chicagobotanic.org

3. The meeting was the First Miami Conference on Isotope Climatology and Paleoclimatology, held at the University of Miami (Fla.), 16–22 November 1975, to celebrate the 25th anniversary of the birth of isotope climatology and paleoclimatology. Dr. Lowenstam was an integral part of this work in Harold Urey’s laboratory at the University of Chicago; for further details see a biography of Dr. Lowenstam in the Biographical Memoirs of the National Academy of Sciences at http://books.nap.edu/html/biomems/hlowenstam.html; and, an interview in the Cal Tech oral history archives at http://oralhistories.library.caltech.edu/archive/00000066/01/OH_Lowenstam.pdf.

4. I found a copy of the May, 1954 issue of the Journal of Geology (volume 62, number 3, the biogeochemical issue). The first paper in this issue was the one of the first and most significant papers using Urey’s isotopic techniques to determine paleotemperatures in the Cretaceous. The lead paper in the issue is Heinz A. Lowenstam and Samuel Epstein, 1954. "Paleotemperatures of the Post–Aptian Cretaceous as Determined by the Oxygen Isotope Method," Journal of Geology, volume 62, number 3 (May), pp. 207–248. Heinz signed the paper for me, and in 1982, I was able to meet Heinz’s co–author, Samuel Epstein, who also signed the paper for me.

My research interests developed as I became older, evolving into an interest in stable isotope geochemistry. I studied the carbon and oxygen isotope geochemistry of a Cretaceous molluscan fauna, which was described in part in this paper, published in 1954.

4. A very neat Web version of a Silurian reef can be found at the Milwaukee Public Museum. Entitled the Virtual Silurian Reef, you can swim around the reef with your Web browser! You can find it at http://www.mpm.edu/reef/intro.html. I particularly like the use of cephalopods as navigational devices.

Lessons from the Silurian: On digitization and the human element by Edward J. Valauskas
First Monday, volume 9, number 5 (May 2004),
URL: http://firstmonday.org/issues/issue9_5/valauskas/index.html