Four months after the attack, does he regret anything? No, of course. "Today I'm convinced that he really was the idyllic victim, more than I thought, more than the victims we are actually threatening, Bill Clinton, Tony Blair or Jacques Chirac. They are puppets, only Gates is pulling the strings. Many people think that after him there is only one other powerful man in the world, the Pope," explains l'Entarteur ("encaker" or "pie-er").

It is this question of Power that led the pie commando to the leader of Microsoft, at the entrance of Le Concert Noble on Arlon Street in Brussels. Noël Godin doesn't know anything about computers and doesn't care that Netscape isn't part of Windows 98. He doesn't own a PC and doesn't even know what a URL is. His girlfriend, however, uses a PC.

But things are changing, even for Noël Godin. Thanks to some admirers, he now has his own official Web page (still under construction), the Gloupgloup Web site, featuring his slogan "Entartons! Entartons!" ("Let's pie! Let's pie!"). Noël is considering bringing the internet into his home, but he wasn't able at this time to tell us if he will use - or will not use - Internet Explorer.

The following interview was completed shortly after the pie attack in February. You won't find in this interview the name of the traitor in the staff of Microsoft Belgium who helped the cream commandoes to fulfill their mission. Noël Godin has promised not to reveal to anyone his identity. "Today he hasn't got any problems at Microsoft. No one suspects him, he's not in trouble," Noël simply explains. However there are some who are still trying to track this insider down. "Each week I receive three or four phone calls from strange people. At first, they are very kind - then they want to know more about this man from Microsoft, in a very clumsy way."

This interview was conducted and translated by Hugues Henry and originally appeared in the Netly News on 9 February 1998. It is reprinted with the permission of Netley News and Hugues Henry. 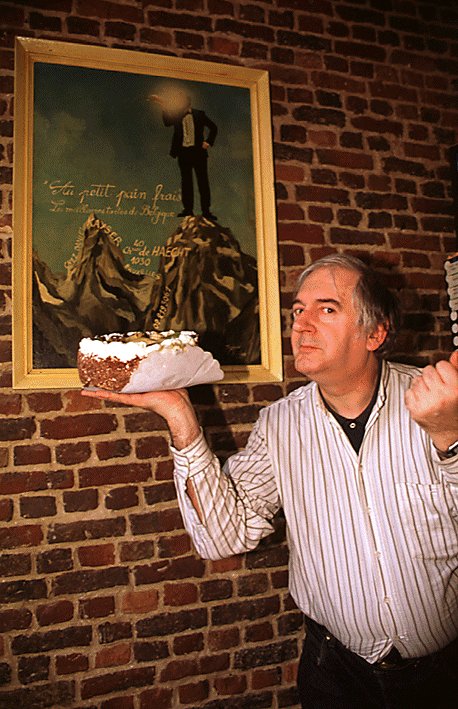 Noël Godin in his house in Schaerbeek, Brussels. On the wall, a painting inspired from the little shop where he bought the pies for the attack against Bill Gates, called Au Petit Pain Frais.
Photo credit: Walter Cornu/Frites.be

First Monday: Who are you, Noël Godin?

Noël Godin: I'm part of a gang of bad hellions that have declared the pie war on all the unpleasant celebrities in every kind of domain (slogan: "Let's pie! Let's pie! Nincompoop guys!"). We began to act against "empty" celebrities from the artistic world who were thinking they were the cat's whiskers. Then we attacked the TV news business in France, for instance, Patrick Poivre D'Arvor [a famous French TV presenter]. Then it became political with Philippe Douste-Blazy in Cannes, the French minister of culture, or the other French minister Nicolas Sarkozy last year in Brussels.

FM: When did you first pie someone?

Godin: In November 1969, with French writer Marguerite Duras, who represented for us the "empty" novel.

FM: Why did you choose Bill Gates?

Godin: Because in a way he is the master of the world, and then because he's offering his intelligence, his sharpened imagination and his power to the governments and to the world as it is today - that is to say gloomy, unjust and nauseating. He could have been a utopist, but he prefers being the lackey of the establishment. His power is effective and bigger than that of the leaders of the governments, who are only many-colored servants. So Bill Gates was at the top of our lists of victims. The attack against him is symbolic, it's against hierarchical power itself. Our war cry was explicit: "Let's pie! Let's pie the polluting lolly!"

FM: So you have a whole list of people you want to pie?

Godin: Yes, we have meetings here in my house. These are funny meetings; we have a good time with good drinks and at the same time we plot. We always agree on the target choice and then we have to study how to reach the target.

FM: How did you prepare to pie Bill Gates?

Godin: For several years, there's been a new phenomenon. Traitors appear in the entourage of our victims who contact us to give us firsthand information. Our victims, at first sight, are very unpleasant and they are far from being loved in their own circle; this is our trump. For instance, these last years, Patrick Poivre D'Arvor, [producer] Daniel Toscan du Plantier and [French minister] Nicolas Sarkozy have been betrayed. In the case of Bill Gates, a member of the staff of Microsoft Belgium contacted us and gave us a mysterious rendezvous. Thanks to him, the operation was a success. Of course we won't give his name. It's a secret; only a few know his identity. But we want to tell it because we would be very amused if there was suspicion in the staff of Microsoft. "Who's the traitor?!"

It happened one week before the arrival of Bill Gates in Belgium. We received, little by little, very precise information about the planning of the Bill. Some Parisian accomplices followed him the day before, step by step, notably when he first met Lionel Jospin [French prime minister]. For instance, we learned that he was always escorted by five armed bodyguards but no more. In Belgium, he had four motorcycle policemen and he had five important rendezvous that day. So, to succeed, we only had one solution: our number. We were 30 individuals. That's why we succeeded. We were extremely determined, we were in a good mood. We were a funny commando.

We were divided in "gloupinesques" [from his pseudonym, Le Gloupier] fighting units of three on Arlon Street, where people were waiting for him in Le Concert Noble. There was traffic in the street so the plotters were anonymous. When Bill Gates arrived with screaming sirens, he walked outside his car and as he was climbing the steps several of our fighting units gathered and they created a kind of pie whirl that fell on him. The bodyguards were completely distraught. None of them even took out his gun. They were as dazed as Bill was.

FM: Do you know why there's a traitor in the staff of Microsoft Belgium? What were his motivations?

Godin: This man told us he really loved Bill Gates in the past, saying that he was very cool and passionate. But little by little he considered that his power had tainted him, and that he was becoming more and more haughty with his own collaborators. So the man who gave us the information considered, and he's not alone, that it wouldn't be bad to teach Bill a lesson, to bring him back to reality. That's how he explained to us why he was doing it. He's far from being a member of our band, he's not an anarchist and he likes his work with Microsoft, but he thought it had to happen.

FM: So you weren't paid by someone from Netscape or Oracle?

Godin: Certainly not; I wasn't even aware of their existence.

FM: Weren't you afraid of the armed bodyguards and the police?

Godin: This time, yes, we were afraid. We didn't sleep very well the night before. We thought, since the bodyguards of Bill Gates are professional, they won't fire. I told my men, "Be happy and show it is only cream." To be strong, we drank some good Trappist beers. So they were laughing and joking when they went to the front... Of course I wasn't in the commando because the authorities, the press... they know my face. It would have been a mistake, even with a disguise. So I was on an adjacent street.

FM: How many pies were thrown?

Godin: Four touched Bill Gates in the face. There were 25 pies in all. One of the secrets of the gloupinesque operation is that you don't have to throw the pies. You must put the pies point-blank in the face of the victim. One of the members of the victorious commando is the filmmaker Rémy Belvaux ("Man Bites Dog"). He unfortunately lost his papers and so the cops revealed his identity.

FM: What were their feelings just the second after they touched Bill Gates with the pie?

Godin: The exhilaration of victory. Exquisite pleasure. The gloupinesque operations have a 95 percent success rate. But each time we are stressed, and each time it's the same pleasure.

FM: How did Bill Gates react?

Godin: He had a kind of promotional smile that became a kind of smile made of sand...

FM: When you touch your victim, don't you have the feeling of being powerful? You had pies, but it could have been a knife.

Godin: Yes, but this is not our problem. We are comical terrorists and the pie is symbolic. The victim is only injured in his self-esteem. We take a lot of care that the pies can't hurt psysically. The pastry is soft and full of cream.

FM: Do you cook the pies?

Godin: No, we are very lazy. We buy the pies in a shop nearby the place of the crime. This time, the pies where coming from a little shop called Au Petit Pain Frais, chaussée de Haecht.

Godin: No, it would be catastrophic for him and his reputation.

FM: If someone gave you money to pie his enemy, would you accept it?

Godin: We have never been pie mercenaries. But we've had several offers of a good amount of money. For instance, I had an offer to pie Catherine Deneuve in Cannes and also Sharon Stone. I refused. I love Catherine Deneuve and the movies of Jacques Demy; and that year Sharon Stone was in a western I really liked. So I had nothing against her. We are pie pirates. But if we receive money when we pie someone, we are not puritan leftists. We received money once: in the case of [famous French singer and actor] Patrick Bruel. We offered the money to the anarchist Parisian magazine Mordicus. So if someone wants to give us money we won't misuse it. I could really enjoy life if I could earn much money doing this job! It's a big game and we have fun together. We want to live fast and to laugh as much as we can. We want to transform our lives just like Oscar Wilde wanted to. Everything is awful around us, so let's try to have fun.

FM: If Bill Gates had to come back in a few months in Belgium, would pie him again?

Godin: We shall see. But we declare war on all the governments of the world, on Tony Blair, on Bill Clinton, on the pope... When the pope last came to Belgium, if we'd had a traitor sponsoring us, we'd have pied him. We had a strategy. For us, the pope is a dangerous serial killer because he is against the preservative [birth control]. On our blacklist, you will also find Demi Moore; Tom Cruise and John Travolta, who are both members of the Scientology; Bill Graham... On the other hand, we have more and more sympathizers everywhere. We had thousands of propositions to help us, even abroad. We also have many enemies. But we are like the characters of a cartoon. We are like Laurel & Hardy, Bugs Bunny, the Marx Brothers, the yippies of May 1968.